To give the visitors of the The International Green Week a clear visual of the activities, there was made use of a 360-degree video. The video was played with the help of look-and-play software. As soon as the glasses are worn the video starts playing, The viewer will subsequently be taken to the plantations in Ivory Coast. In the video, which lasts about 2,5 minutes, the dramatic results of deforestation in Ivory Coast are presented. Subsequently the new method and process is shown. This illustrates how valuable an intact forest agricultural system is for both the environment and the farmers.

The stand was decorated extensively, it attracted a lot of attention in part because of the Gear VR glasses. The response to the experience was very positive. 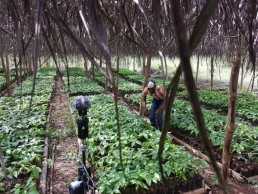 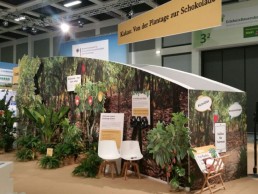