In order to kick off a large internal event, Landal GreenParks wanted to show their employees why they should be proud to be a part of this company. The goal was to show all 360 guests from various countries including The Netherlands, Germany and Denmark, a 360° video about the location in Hoog Vaals, which was also the venue of the event.

"In the 360-degree video the viewers are escorted through the park using facts and figures."

In collaboration with the event organization Obsession and Landal GreenParks a concept was developed and a script drafted. In the 360° video the viewers are escorted through the park using facts and figures. The video was organized according to the cause-and-effect structure. First we see the activities of the employees at the park and subsequently the enjoyment of the guests. There are also several 360-drone shots added to the video that show a beautiful view of the entire terrain.

The sports hall of Landal GreenParks Hoog Vaals was transformed into a magnificent event location. During the dress rehearsal the last details were perfected with a seamless 360-kickoff leading to the rest of the program. Our developer, event manager and eight employees were present to make sure everything went according to plan. 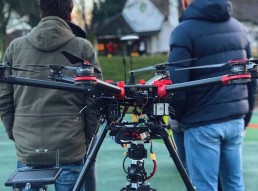 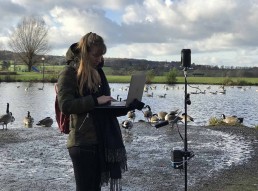