The new HBO series ‘His Dark Materials’ is partnering with Snapchat. HBO uses augmented reality filters based on geo location to reach the mostly teenage audience.

Using Snapchat’s Marker Tracking technology and key art from the series, Snapchat users could experience a giant polar bear bursting through posters installed in New York City and Los Angeles. This is not where the AR experience ends. At a specific location in Los Angeles, fans can take selfies with additional filters which show the stars of the series, in addition to branded icons and dates when the episodes air.

HBO choose Snapchat because the app recently passed 210 million daily users in which 90% aged 13 to 24. The AR activation was viewed by many, and judging from the reactions on Twitter, people find this way of product activation fun to use.

The immersive experience is unlike anything they have seen before. It’s an ideal way to communicate with the target audience, and HBO sees AR as the future of their campaigns. 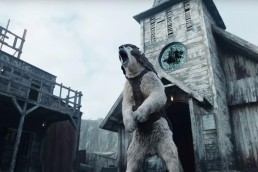 This case and more? Subscribe for a single monthly update.

Jumanji: The Next Level WebAR Experience